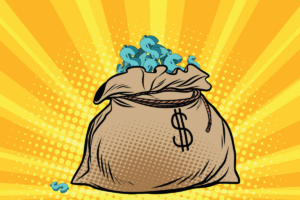 It’s no secret that it pays to be a Biglaw equity partner. A 2022 survey of partners in “NLJ 350- and Global 100-size firms” found average compensation of $1.12 million, a 15% increase over the average in the prior survey conducted in 2020.

Seven-figure compensation is nothing to sneeze at, but as with professional sports teams, the real stars of Biglaw make significantly more than the average. Firms vary widely in their compensation ranges. At the most traditional end of the spectrum, a firm’s highest-paid partner might take home 4x the pay of the lowest-paid partner. In contrast, at a firm with a strong eat-what-you-kill culture, that ratio may be 10x or higher. Bloomberg reports that the top earners at Kirkland & Ellis earn more than $20 million annually. Eight-figure pay packages remain uncommon in Biglaw, but with competition for partners with the strongest books of business as intense as ever, rainmakers at an increasing number of firms are breaching the $10 million mark.

So the top tier of law firm partners are doing very nicely, indeed. But what about the leading in-house lawyers? In this article, we take a look at the pay packages of the top 100 highest-paid General Counsels, in comparison to partners of top Biglaw firms (as measured by profits per equity partner). We find that on a cash compensation basis, equity partnership is more lucrative than being a General Counsel. But the story is more complicated when taking stock options into account.

A quick note on sources. For general counsel compensation data, we look at the top 100 highest paid GCs as listed in the 2022 ALM Intelligence GC Compensation Survey. This data set is not comprehensive. For one thing, ALM compiles its data from proxy statements filed with the SEC, so only public companies are included. Our source for Biglaw partner compensation is the 2022 edition of the Am Law 200 ranking.

It’s hard to outearn a top Biglaw partner (in cash)

What about cash compensation growth over the recent past? From a growth perspective, who did better in the two-year period from 2020 until 2022: the top 100 General Counsels or the partnership of the top Am Law firms? The table below shows the results, ranked by growth rate. The law firms in the table were the top 10 firms by profits per equity partner in the 2020 Am Law 200. We see that all 10 Biglaw partnerships outpaced the General Counsels, some by a substantial margin.

But stock options can make a big difference

There are a lot of reasons why an attorney might prefer to be a General Counsel than a law firm partner. But viewed strictly through the lens of compensation, high-performing lawyers are typically better off staying on the law firm track. Of course, that doesn’t necessarily mean they should stick with their current firm. With Biglaw partnerships increasingly diverging in their approaches to compensation, it’s a mistake to assume that a partner with a given book of business will be paid similarly at any comparably prestigious firm. Productive partners have a variety of options—and it pays to know about them.