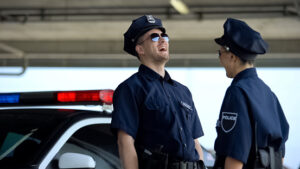 Law enforcement officers have a disturbing propensity for abusing their power. And far too many abuse this power to engage in things entirely unrelated to police work, like browsing databases for information about members of the opposite sex.

When someone with a lot of power expresses an unprofessional interest in someone, the power imbalance makes it extremely difficult for the targeted person to resist these advances. Even in seemingly innocuous cases, it’s abusive, especially when the person making the advances insists on doing so while in uniform and on the job.

This is an issue the Tenth Circuit Appeals Court recently wrestled with: the constitutional contours of a case where the pursuer was a law enforcement officer and the pursued person acted as a liaison for towing companies providing services to the Utah Highway Patrol. It certainly isn’t the sort of case handled regularly by federal courts as the Appeals Court alludes to in the opening of its decision [PDF]. (via Short Circuit)

Today we confront whether the law clearly established that Defendant Utah Highway Patrolman Blaine Robbins violated Heather Leyva’s (“Leyva”) Fourteenth and Fourth Amendment rights by pulling her over without reasonable suspicion to do so and by sending her flirtatious texts about the administration of a commercial towing relationship between her employer and the Utah Highway Patrol. In doing so, we consider the unique relationship between Defendant and Leyva in the context of each alleged constitutional violation.

Heather Leyva and the patrolman interacted frequently. Leyva worked for West Coast Towing (WCT), one of three companies in the Highway Patrol’s Heavy Duty Towing Rotation (HDTR). Leyva was the contact for the towing company and Patrolman Robbins managed the towing rotation. As the court notes, the relationship eventually evolved from a professional one to a personal one.

But it appears the patrolman thought there was a lot more going on than there was. What he saw as reciprocation was actually Leyva trying to preserve the professional relationship that made money for the towing company she worked for.

As the relationship evolved, Defendant’s communications with Leyva extended beyond helping Plaintiff resolve her HDTR questions. He sent dozens of flirtatious and suggestive text messages. She sometimes responded in kind. Plaintiff claims Leyva did so because she feared upsetting Defendant would affect WCT’s access to valuable heavy-duty towing jobs.

Leyva was also pressured by West Coast Towing to resolve what it believed to be unfair assignments that appeared to favor the other two companies in the rotation. Patrolman Blaine insisted nothing was being handled unfairly. The two continued to contact each other, with the patrolman handling most of the flirting duties.

Then things got weird and stalker-ish.

A couple of months after working with each other and after the relationship started to change, Defendant texted Leyva one night around 5:00 p.m. He asked about work-related matters. In response to one question, Leyva told Defendant to “standby” because she was on the freeway. Defendant asked where and said he would pull her over. Defendant now insists this was a joke. Levya told him the milemarker number as she passed it. Defendant asked where she was going. Leyva told him and said she would return in twenty minutes. Based on Plaintiff’s response, Defendant said, “I’ll be waiting 285. You in the what [sic] car. White car.” Leyva never responded.

It was a joke, says the sued officer. Except that he did exactly that later that evening.

Two hours later, Leyva was driving home in a different car at a different location. Defendant spotted her, turned on his lights, and initiated an apparent traffic stop. Leyva pulled over, not knowing Defendant was the driver of the patrol car, and got her identification ready. Defendant said, “I don’t need to see that, just seeing you is enough.” Defendant claims he pulled Leyva over as “a joke between friends.” They spoke for a short time and then went their separate ways.

Well, it may have been a joke but the patrolman was the only one laughing. Leyva told her boss at West Coast Towing that she felt she was being sexually harassed by Patrolman Blaine. Her boss reported Blaine to his supervisors at the Highway Patrol. The Highway Patrol investigated Blaine and determined he was still handling the towing rotation properly but that his conduct towards Leyva was unprofessional. It also determined he had no reasonable suspicion to perform the traffic stop. (Clearly Blaine knew he had no reasonable suspicion to engage in a stop. After all, he insists it was just a joke.) Patrolman Blaine was ultimately demoted and relieved of his towing rotation duties.

The district court examined these allegations and determined the patrolman had not violated any clearly established law, granting him qualified immunity simply because he had found a novel way to violate someone’s rights. It did this despite Patrolman Blaine making extremely stupid arguments like this:

Before the district court, Defendant asserted that Leyva consented to the traffic stop. The district court rejected this argument because “[n]o reasonable citizen would feel free to disregard a UHP vehicle with its emergency lights activated.”

To be fair, the district court also made some stupid determinations when finding in favor of the officer’s “not clearly established” argument:

In making this finding, the district court analyzed whether “the law clearly established that the traffic stop did not constitute a consensual police-citizen encounter.” ROA Vol. II at 147 (emphasis added). But that is not the proper inquiry. Instead, the question is whether Defendant had fair notice that conducting a traffic stop without reasonable articulable suspicion of criminal activity violated clearly established law.

This was so obviously a violation of rights the Tenth Circuit seems bewildered the patrolman would continue to insist otherwise. Just because the lower court blew the call doesn’t make him any less wrong. Every law enforcement officer would know a traffic stop without reasonable suspicion is a rights violation. And this officer knew he was on the wrong side of the law because he freely admitted he did it as a “joke.”

[O]ur reasonableness inquiry requires that an officer observe or have an articulable suspicion of a traffic violation before making a stop regardless of any other subjective motives the officer might have. A reasonable officer in Defendant’s shoes would have known that. Defendant admits he did not possess any reason to stop Leyva when he pulled her over. He never asked for her license or registration. And he issued no citation. He later noticed a cracked windshield but concedes he did not observe or suspect this before stopping Leyva. To him, he stopped Leyva as a “joke between friends.” Because Defendant pulled Leyva over without at least an articulable suspicion of a violation, we conclude that Defendant violated Leyva’s clearly established Fourth Amendment right to be free from an unreasonable seizure.

And that ties into the Fourteenth Amendment claim stemming from the sexual harassment allegations. Again, the Appeals Court says the law was clearly established at the time Patrolman Blaine engaged in his “joke.”

Defendant does not dispute that he engaged in unconstitutional sexual harassment when he stopped Plaintiff. And the law was clearly established at the time that he could not use his state-derived authority as a police officer to engage in sexual harassment.

This heads back to the court that screwed it up during its first pass. It’s a win for Leyva, but it won’t matter much to her. She passed away while the lawsuit was pending, so any payout will be headed to those handling her estate.

But here’s the most fucked up thing about this. And by “this,” I mean qualified immunity. The officer admitted he violated Leyva’s rights. And yet, this admission changed nothing about the qualified immunity discussion. The officer who knowingly violated rights was granted immunity by the lower court despite having no better argument than “I bet you can’t find a precedential case on point.” It would seem that if a sued officer admits knowingly violating rights, qualified immunity should no longer be an option available to them. Unfortunately, that’s not how it works. Leyva’s survivors had to spend more money appealing the lower court’s horrendous decision. And they had to do this despite the officer knowing he was in the wrong from the moment he decided to pull her over.

If You Want A Summary Of All The Ways In Which Elon Is A Hypocrite In How He’s Running Twitter, Watch This Video
Louisiana Cops Use Facial Recognition Tech To Arrest The Wrong Person For String Of Robberies
Biden WSJ Tech Op-ed: More Of The Same Confused Stuff He Said Last Time