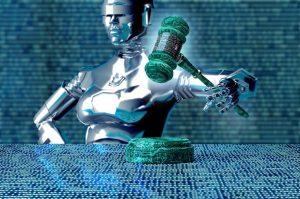 There’s lots of talk recently about artificial intelligence and specifically the chatGPT engine. It’s an AI system that is capable of eerily responding in long form to any number of inquiries. Will it destroy the college essay? Eh, maybe. And its implication for the practice of law is being hotly debated. But Cornell Law professor Michael C. Dorf put the AI up against the Supreme Court, and the victory was decidedly on the side of the robots.

Let me explain. We all know the Supreme Court recently took up the case of 303 Creative LLC v. Elenis. In this case, a woman who runs a website graphic design business that does not offer wedding websites sued over laws that she might breach if she ever decided she will offer wedding websites and then a same-sex couple hypothetically would ask her to design one. Yes, the case probably should have been laughed out out court on standing grounds (and maybe… just maybe that argument will still hold sway with the Supreme Court). But the mere fact the Court granted certiorari — plus the tenor of the oral argument — seems to indicate a majority of justices are ready to allow at least some businesses to engage in discriminatory practices under the guise of the First Amendment.

But when Dorf put the question at the heart of the case to chatGPT, well, it gave a far better — as Dorf describes it, more ethical — answer than we’re likely to get from the Court.

It may be a little cliche to say I, for one, welcome our robot overlords but seriously — what chatGPT put out is infinitely preferable to what Samuel Alito is sure to write in the case.