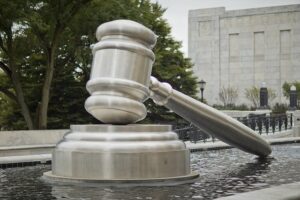 Last week, we brought you news of the explosive lawsuit top Biglaw firm Proskauer filed against its former Chief Operating Officer. The firm alleges the now-former COO, Jonathan O’Brien, downloaded 34 gigabytes of internal data to a USB drive before announcing he was leaving the firm. The complaint also alleges O’Brien attempted to delete emails subject to a litigation hold.

Among the relief sought by the complaint was an ex parte temporary restraining order to preventing O’Brien from disseminating the internal documents he downloaded. And that’s exactly what Southern District of New York Judge John Cronan granted in the case. O’Brien left on a paid vacation to Mauritius on December 22 and is scheduled to return to the country January 4.

As reported by Law.com:

Cronan’s order on Dec. 28, nearly identical to Proskauer’s request for relief, requires O’Brien to return files no later than Jan. 5, the day after he’s scheduled to return to the states. That deadline was set in advance of a Jan. 10 hearing on Proskauer’s motion for a preliminary injunction.

“Injunctive relief here will advance the public’s compelling interest in upholding the sanctity of confidential information and other trade secrets and preventing the unauthorized use of such information,” Cronan said at last week’s hearing, according to a transcript of the hearing that was obtained by The American Lawyer.

Although it remains unclear where O’Brien planned to work when he turned in his notice at Proskauer, according to the complaint, O’Brien indicated firm leaders would not be “happy” when they learned of his new employer. But Cronan’s order would also apply to that party:

[T]he temporary restraining order also applies to “anyone acting in concert” with him and it temporarily bars O’Brien from working or consulting for any entities with whom he has discussed or disseminated the allegedly stolen material.

In granting the TRO, Cronan said “the plausible inference is that his next employer will be a competitor of Proskauer Rose and that the defendant would be seeking to use the information he stole during that employment.”

At the TRO hearing, partner Michael Mervis represented the firm and indicated that the alleged stolen documents were internal strategy, financial, and compensation documents. No documents “that would reveal client confidences, attorney-client communications and work product and the like” were compromised.