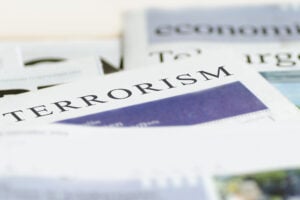 The suit, filed in August on behalf of American service members and civilians killed or wounded by al-Qaeda, al-Qaeda-in-Iraq, and Islamic State, claims that Ericsson agreed to pay protection money to these groups in order to maintain its business prospects in Iraq and Afghanistan, despite knowing that these payments funded terrorist activity. Beyond the payments, Ericsson also allegedly facilitated the “direct transfer of high-tech, U.S. military-grade, U.S. origin communications technologies” to terrorist groups. And this all happened over the course of at least 15 years.

Earlier this week, the plaintiffs through their attorneys at Sparacino PLLC filed a 779-page Amended Complaint alleging that Simpson Thacher was aware of these practices by 2014 — at least five years before they ceased — and helped the company as a “reputation launderer” by virtue of its standing in the legal community. There’s a bit of alphabet-soup with different Ericsson entities allegedly acquiring knowledge of the scheme at different times, but there are paragraphs like this one:

The “U.S. government investigation” resulted in the Department of Justice entering a deferred prosecution agreement with Ericsson and the company agreeing to pay $1 billion for multiple FCPA violations involving bribes to officials around the world, but pointedly not the terrorist organizations involved here. Simpson conducted the internal investigation in conjunction with the DOJ inquiry and finalized its report after the DPA was signed.

That report leaked to reporters in February and it kinda sorta mentioned the whole “paying off terrorists” stuff. Though, as the Amended Complaint puts it, “Many of the ‘findings’ were written in the passive voice to obfuscate the culpability of particular Ericsson personnel. Other findings were obvious examples of Simpson Thacher pulling punches.”

As one might imagine, the DOJ had some additional concerns at that point.

DOJ has publicly taken the position that LM Ericsson breached its ongoing obligations to the U.S. government under the DPA by having concealed the existence of that investigation and the findings set forth therein (representing the second time in roughly two years DOJ has accused LM Ericsson of breaching the DPA).

That’s all… well, that’s all not good. If the firm learned of the conduct after the fact and helped Ericsson keep it from the government it’s bad and if the firm had any knowledge of these payments before they stopped it’s way, way worse.

We reached out to Simpson for comment yesterday but have not heard back. We’ll update this story if we do. You can read the full Amended Complaint on the next page.