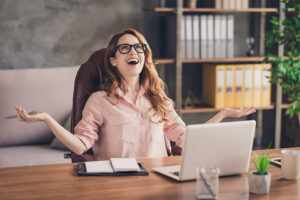 Sometimes an end of the year column looks at what the past year has wrought and makes predictions for the year to come. Not mine. I will leave that to others with Ouija boards, tarot cards, crystal balls (mine is in the shop) and the ever popular but not necessarily dependable Magic 8 Ball.

So, I will look back at some of the things that lawyers did this past year that gave us about the only humor (some intentional, some of the unintentional aka “you’ve got to be kidding” variety) we had.

A California law firm posted a job on LinkedIn showing that at least some lawyers still have senses of humor. This firm (and I wonder if the job has been filled) has its tongue firmly in cheek describing some of the perks for working for the firm: commuting consists of walking from bed to home office, appropriate attire is sweatpants with pet hair (I can relate), and the duties that the associate attorney will be expected to do, most, if not all, of them usual associate responsibilities. Never have I seen a firm be so blunt in how much crap the successful applicant will be expected to eat. Bravo to this firm for truly telling it like it is. Definitely funny.

Whether something is funny depends on your point of view: are you leading the parade or cleaning up after the elephants? Here’s one lawyer who falls into the latter category.

This partner thinks that Biglaw is a “scam.” He’s not the first person to think that, although I don’t think that many say it publicly, but an issue for him is whether the juice is worth the squeeze, that is,  is the financial obligation of being a partner worth it? Funny or not?

Has anyone read the new book “Servants of the Damned” by David Enrich? It’s a history of Jones Day, how it morphed from a local Cleveland firm to today’s powerhouse. It’s a fascinating read. But Jones Day clawing back bar exam fees from a former associate doesn’t make a good impression for the firm. Where’s the firm’s sense of humor? Does the “sunk costs” concept apply here?

Let’s analyze this: is it better to be truthful and admit that your hours fall below what’s wanted, or is it better to be duplicitous and avoid litigation, but suffer collateral consequences, such as possible disbarment for fraud? Here’s Exhibit A for what can happen in overbilling situations. Granted that this is an extreme example since the attorney billed more than 24 hours in a day, but you get the picture.

Biglaw firms are experiencing slow collections in the annual year-end rush to get as much money as possible in the door before the ball drops in Times Square. Biglaw is not the only business having collection problems. One company’s collection problem is another firm’s payables dilemma. Any law firms that are “slow pay” to their vendors? Funny or not?

“Bed check” has apparently returned at this Biglaw firm, and I don’t mean WFH sitting on your bed. One Biglaw firm is docking associate bonus payments (of course, not partners) for “insufficient compliance with the mandatory attendance rule.” What rule? Apparently, there was no advance notice of this new docking policy until it hit associate paychecks.

This is the 21st century version of “bed check.” Back in dinosaur days, a secretary (that’s what the term was in those days) walked around the floor with paper and pen in hand and noted who was there and wasn’t. These walkarounds were at 8:30 (starting time being 8:15) and 4:30 (ending time was 4:45). We didn’t have desktop computers then. Desks looked messy and jackets were hung on the backs of chairs to show that we were at work, not necessarily at the desk. Again, unintentionally funny for exempt professionals.

Everyone needs to be careful when opening a can of Pringles, especially in Ohio. Why? The Ohio Disciplinary Counsel has charged an attorney defending a murder case with (and I am not making this up) with pooping into a Pringles can (thankfully empty) and then tossing that can, without a lid, out his car window and into the parking lot where the victim’s case advocate worked. The attorney allegedly then drove off to attend a hearing in the case.

This fact pattern would make a great crossover criminal law-ethics-tort question. Was there an intentional tort or was the attorney merely negligent in his choice of a dumping location? Did he commit any crime? Were any ethical rules violated? Discuss.

The attorney had allegedly used Pringles and poops as weapons of mass elimination 10 other times. Do you think Pringles might sue for defecation? (Sorry, I couldn’t resist.)

And lastly, I will break my own rule about predictions: stories about the State Bar of California and the Tom Girardi mess will continue into 2023. Not funny. Apologies in advance to my ATL editors.

Jill Switzer has been an active member of the State Bar of California for over 40 years. She remembers practicing law in a kinder, gentler time. She’s had a diverse legal career, including stints as a deputy district attorney, a solo practice, and several senior in-house gigs. She now mediates full-time, which gives her the opportunity to see dinosaurs, millennials, and those in-between interact — it’s not always civil. You can reach her by email at [email protected].