COMIC: What Happens if You’re Caught With a Fake ID? 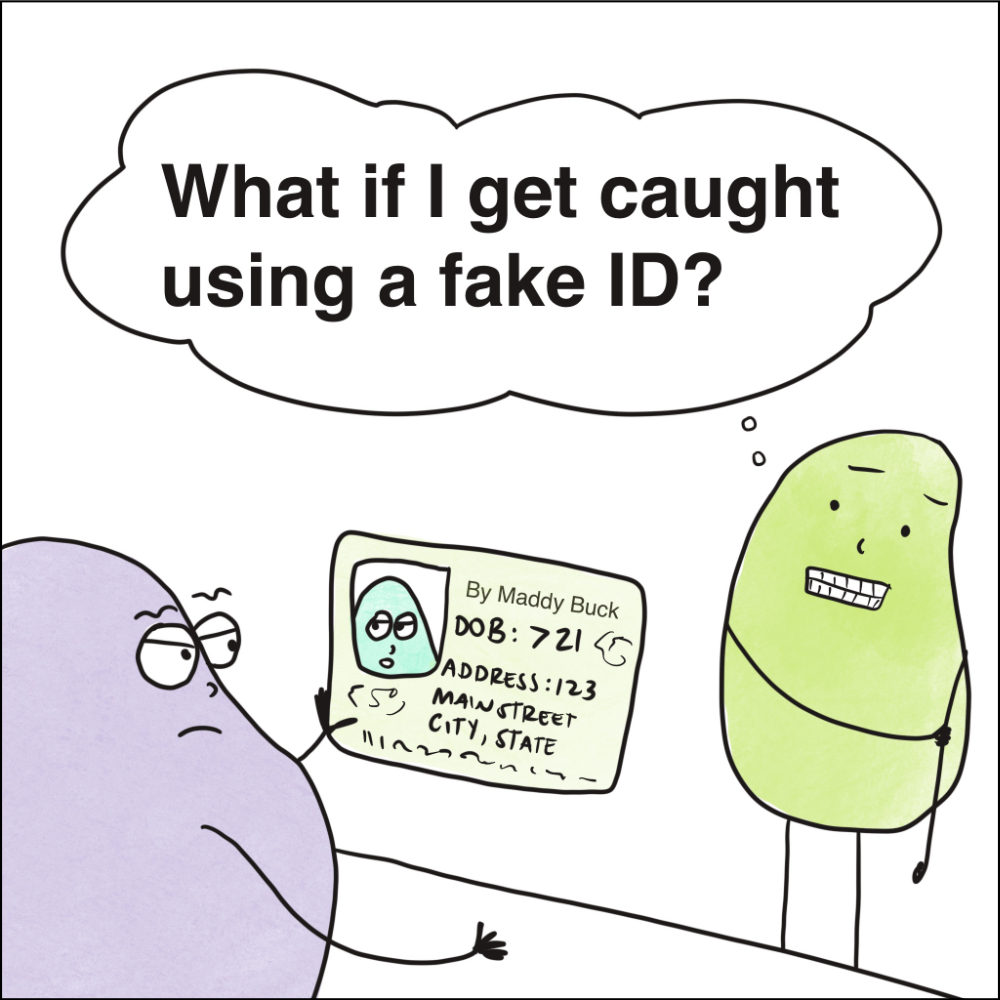 Panel 2: Four small blobs are standing in a line, all holding IDs that we know are fake because there are arrows pointing at them with text that says “FAKE!” On the far left, the green one says, in a word bubble, “See? I’m totally 21!” In the middle of the group, a turquoise blob says, in a word bubble, “I just look young for my age of 22…” Above the image, the text says: “In all states, it’s illegal to use a fake ID — or someone else’s ID — as your own. Let’s take a look.”

Panel 3: A number of state IDs with blob character photos are strewn about the page, in various colors. Above the illustration, the text says: “Generally, it’s illegal to make, sell, alter, purchase, use, or possess fake IDs. But the punishment and seriousness of these types of crimes vary by state.”

Panel 4: An orange blob looks pleased while holding an ID. An arrow points to the ID and says “FAKE.” The blob says, in a word bubble, “I’m 18.” Below, on the left, another orange blob is shown buying a six-pack of beer bottles using an ID that is labeled as “FAKE.” The text on the page says: “This means that if you’re under 21, it’s against the law to:

Panel 5: A single turquoise blob character looks unnervingly at the fake ID in their hand while holding a drink. The text above says: “And, even if you aren’t actually using the fake ID, you can be charged with possession of a fake ID just for having it.”

Panel 6: A turquoise blob stands skeptically at the door of a bar labeled “Cool Bar, 18+ only” while saying, in a thought bubble, “IDs please.” The first of three small blobs waiting in line for “Cool Bar” presents an ID labeled as “VERY FAKE” to the bouncer. Underneath that blob is a label indicating it is only 17. Above the image, the text says: “What if I use the fake ID to get into a bar? Nope. Even if you’re not using it to buy alcohol, it’s still illegal to present a false ID to suggest you’re older than you really are.”

Panel 7: A laughing turquoise blob (labeled as “age 18”) holds an ID that is clearly not its own (the image looks different) while saying, in a thought bubble, “It’s my cousin’s! We’re basically twins!” The text above says, “What if I just borrowed my friend or relative’s ID to use? Doesn’t matter. Even if it’s a valid state-issued ID, it’s still a crime to use it if it’s not YOUR id.”

Panel 8: A character is shown sitting in a classroom learning about the topic “effects of alcohol.” Another purple character is shown picking up litter. Below the other two images is a document with a dollar bill symbol on it that says “FAKE ID, PAY THIS.” Above, the text says: “What if I’m caught? Check your state’s laws, but a minor who is caught possessing, using, or attempting to use a fake ID would usually be charged with a misdemeanor. Punishment for a conviction can include fines, community service, and participation in an alcohol or drug treatment program.”

Panel 9: A sad-looking orange blob sits on one of three chairs outside of the principal’s office at school. Above, the text says: “Could I get in trouble at school? It depends on your school, but a misdemeanor charge could have consequences at school, including participation in extracurriculars, sports, and scholarships.”

Panel 10:  A green blob is lounging on a bed looking at a laptop. In front of it is a countdown clock that says, “Countdown to 21st bday.” The text above says: “So while it may seem like it’s taking forever to reach 21, try exercising a little patience. You’ll get there! In the meantime, learn more about the law at FindLaw.com.”