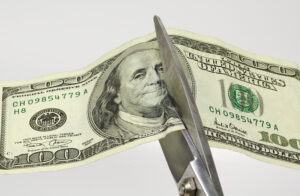 The hybrid office policy at Ropes & Gray is basically a supervillain origin story. Once a paragon of a flexible return to the office policy with a three-day model, fissures grew as partners began complaining that associates were taking advantage of the policy. The firm removed the “flexible” part, mandating a Tuesday through Thursday regime and launching what associates described as an Orwellian surveillance policy to check up on associates whenever they didn’t make it into the office.

Now, the firm is apparently docking bonuses for associates with “insufficient” compliance with the mandatory office attendance rule.

You might point out that in the firm’s bonus announcement this month, there’s no mention whatsoever of reducing bonuses based on the mandatory attendance policy. According to the memo, bonuses would be reduced for failing to meet hourly targets, but made no mention of physical office attendance. Associates received no follow-up policy amendment, with the firm telling associates in their individual performance reviews that bonuses are getting docked by as much as 15 percent.

Which is exactly why associates — even those who dutifully complied with the policy and received the full bonus — are so irritated.

As one tipster put it:

There was no warning about this policy which is making some people pretty mad…. If they wanted to force people in, no one understands why they didn’t just warn us about this policy instead of being silent and then penalizing people without any warning.

Firms do need to get associates back in the office. There’s too much “soft learning” that new associates pick up by the happenstance of screwing up in front of a midlevel who may not even be in the same practice group. Revamping training models can only convey so much when it comes to those accidental lessons. There are also critical business development connections forged in the office because — in Biglaw — future clients are generally the associate you have lunch with who will one day be the Deputy GC somewhere else.

Which is why this all reads like an origin story. The best villains have entirely reasonable motivations. They just take it too far.

Because associates generally understand all these concerns and that’s why very few voices are out there agitating for permanent remote work. But they want flexibility. If there isn’t any business reason to go in on Tuesday, they want to be able to go in Friday. If their best child-care arrangement involves coming in Monday-Wednesday, that’s what they want to do. Or, perhaps more to the point, they want to be treated like professionals in making those decisions.

We reached out to Ropes multiple times for comment on these reports yesterday and have not heard back. We will update this story if we do.

Enter your email address to sign up for ATL’s Bonus & Salary Increase Alerts.